I guess the best way to begin something is to start from way back.

In earlier days in Finland, each farm had a name. When a farm was purchased, the new owner took the name of that farm for his surname. My grandfather’s name was Setala before he bought the Keturi farm. 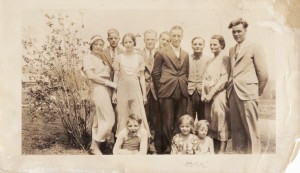 Elmer's Parents, Brothers and Sisters in 1927

My father, Frank Isaac Keturi, came from Finland in 1891 when he was eighteen years old. He settled in Houghton, Michigan, because he knew some people there who had arrived previously. They taught him to say, “I vant vork.” He went from place to place repeating his three words, finally getting a job in the underground iron mines.

My mother, Amanda Perala, came alone from Finland in 1900 when she was only fifteen years old. She too, already had friends in Houghton. Soon afterwards mother and dad were both invited to a gathering. Dad told me years later that when he went in he was very attracted to this slim, beautiful girl with the long dark hair. It was not long before they were married.

Dad had been saving his money to send for his mother and father from Finland. Soon after they arrived, he bought some land about three miles from town. He worked the night shift at the mine and after breakfast went out to help his father cut and burn brush to clear the land. He slept a few hours each afternoon before returning to work.

Grandpa was an excellent carpenter. So with enough land cleared, dad and he built a house and barn.

Grandpa and grandma settled close by. Grandpa got a bottle now and then and became pretty rambunctious and ornery. Grandma gave him heck, and we could sometimes hear him hollering from his front porch to a nearby neighbor, “Mylund Mylund, come and help me! This woman is going to kill me!” That really set grandma off.

Dad went from house to house in Houghton asking people if they would buy bottled milk if he started a dairy farm. With customers promised, he bought some cows, a team of horses and a wagon, building up a good paying business; but after several years he grew tired of fighting the snow storms and drifts.

His older sister Sandra, married and living in West Barnstable’ Massachusetts wrote to him to come there. She was sure he could find work He sold everything to a Finnish friend and we all went to Cape Cod.

There were five children by then. The sixth child, a girl, had died at the age of two. Lempi was the oldest, I was next, then Aileen, Leonard, and Oscar.

Dad bought a nice house close to West Barnstable and began looking for work, but no jobs were available for laborers. Several acres of land came with the house, including a cranberry bog loaded with berries, so we did make a little money when we sold them.

After spending the winter without work dad was determined to take us all to Finland. Mother was very much against the idea but finally agreed. On the way to the railroad station to purchase tickets to New York, where we were to board the ship, he stopped at a neighbor’s. The neighbor asked why not go to Spencer, New York to look at the farms advertised for sale in the Finnish newspaper.

After learning that mother would be pleased, he went to buy a two hundred and ten acre farm about five miles from the village of Halsey Valley. We left our house in Massachusetts to be sold by Aunt Sandra and her husband; but they sold their own instead and bought ours.

About 1921 we bought a big farm called The West Plantation, near Halsey Valley. It had been owned by the West family for years and years. The Plantation was a much better farm than our first one, with more flat land. It had many corrals and open front sheds, since it had been a stopping off place for drovers when they moved big flocks of sheep, cattle, and hogs to the slaughter houses in New York City.

Dad’s brother John, with his family, came from Butte, Montana, and bought a farm close by. Grandma went to live with them, but grandpa had a room with us at the Plantation. They got along much better apart.

Mother’s mother had died in Finland. Her father remarried, coming from Michigan to live until their deaths in the little tenant house that was on the Plantation.

By now brothers Raymond and Arthur had been born, and not long afterward, sisters Irene and Doris. When we were old enough, we all had to help milk the cows in the morning before going to school. When arriving home we boys changed our clothes and went into the fields to plow or harrow in spring and fall. Winter mornings and evenings had milking chores, cleaning the barn, feeding the cattle, and sawing and splitting firewood.

I was growing so fast that I was always tired. One evening after school I had been sent to plow the long flat field across from the house. Dad looked over and wondered why the horses were standing still in the lower end of the field. He came to look, to find me fast asleep under a big oak tree. He felt so sorry for me that he began to plow and sent me home to sleep.

I trapped skunks in the fall and winter to make a little money. Pelts with the least white brought the best price, which was as high as five dollars.

In the winter of 1919 Aina and Gus came to visit us from Alaska. Gus lent me his brand new raccoon coat to wear to school one morning during a fierce snow storm. I checked some of my traps and had a skunk. Carefully laying the coat on the snow quite a distance away I killed the skunk. When I walked in the school door, proudly wearing the coat, the teacher yelled, “Elmer Keturi, you get out of here and don’t you ever come in here smelling as you do!”

I began to worry that maybe the skunk did spray some on the coat. When I walked into our kitchen, Gus blew his top, saying, “I should have known better than let a skunk master wear my coat!”

A neighbor said to dig a hole to thawed ground and bury the coat for two days, then hang it out to air. It worked. No more smell.

On summer evenings our whole family often crowded into our surrey with the fringe on top to go riding through the countryside. We all liked to sing and mother and dad had good voices.

A bunch of us teenagers sometimes gathered at a vacant house 9 where we ate sandwiches brought by the girls and played singing and kissing games. I remember “Last Couple Out,” “Heavy, Heavy, Hangs Over Thy Head,” and my favorite, “The Needle’s Eye”.

The needle’s eye, the needle’s eye,
The thread that runs so truly,
For many a lass have I a  passed,
Because I wanted you,
With a bow so neat,
And a kiss so sweet,
We do intend before we end,
To have this couple meet again.

I never liked farming but did like tinkering with and repairing machinery. When I was twelve years old dad bought an old 1913 Model T Ford pickup truck. I spent a lot of time working on it, being the first to learn to drive it.

At seventeen I wanted to go to Detroit to an auto mechanic’s school. Dad approved but mother was afraid to let me go alone to such a large city.

A road improvement program was started in the area. Many of the farmers went to work with their teams of horses, hauling rock from the hillsides. Others loaded the belly dump wagons furnished by the county. I drove our team. I told our neighbor that I hoped when I got as old, bent over, and crippled as some of the men were, I wouldn’t have to work so hard in order to live.

He replied, “You will. You will!” Social Security came years later.

By the time I was twenty one we had owned, besides the Model T: a Mitchell Six, seven passenger touring car; Velie; Chalmers; Cleveland; Willys Knight; Chrysler “65;” Reo Speed Wagon truck, and a Desoto sedan which we purchased new. The others were used. I kept them all in running order as none of my brothers took much interest in mechanic work. Since the cars were second hand, we had to keep getting better ones.

I hauled our milk in forty-quart cans with the Reo Speed Wagon to a creamery, from where it was shipped in railroad tank cars to New York City. I picked up milk cans from farms along the way, making pretty good money until Myron Cristfield bought a new Ford Model T truck and took several of my customers by offering to haul cheaper. This didn’t set very well with me.

Cutting the exhaust pipe on the Reo, I put a Y in it with an exhaust whistle on the Y consisting of five pipes, the longest being six inches with each one a little shorter. By pulling on a cable, I could close the valve, forcing all or just part of the exhaust to go through the whistle, making a sound which could blast the britches off you. When Myron was slowly going along I would come up behind him, opening the whistle wide.

His truck pulled over so fast that it seemed to slide sideways, as I went roaring by. Must have scared him every time but he never complained.

In the summer of 1926 a gas company was putting in an underground natural gas pipeline from Pennsylvania to Syracuse, New York. Many hillsides were too steep to dig with the trencher, so those places were dug six feet deep by hand. Nearly four hundred men, including a lot of farmers, worked there. One of my brothers and I joined them for thirty cents an hour, ten hours a day, seven days a week.

Because of the hard times, men were so plentiful that if we straightened up a bit to rest our backs, a foreman, one of those stationed about every five hundred feet, yelled at us, “Get to digging or go home!”

We were treated like a bunch of animals, but a lot of us were able to stand it, sticking to it until the job ended, for our families desperately needed the money. Later came the unions which put a stop to that kind of treatment.