We sold the truck to one of my friends who worked for the county. He paid me cash, almost as much as I had paid, for the price of trucks had gone up a lot. We also sold our nice Chevrolet sport coupe and all other belongings, such as they were. Going fifty-fifty on a car with Aina and Gus, we drove west.

Uncle Oscar had died a month before of miner’s consumption, caused by copper dust in his lungs, from working in the mines in Butte years before. Cousin Gertrude died in Fort Yukon soon afterward.

Aunt Bertha decided to sell her home and go with us to Alaska. She went to Fairbanks and worked for Cap Lathrop in his apartments until her death of a heart attack in 1943.

The trip up from Seattle through the Inside Passage and the Gulf of Alaska to Seward on the S.S. Yukon was beautiful. The Gulf was smooth and we saw whales spouting. Many Midwest farm families were on the ship. They had been chosen by the Government because of their desire, ability and good health to hack farms out of the Matanuska Valley wilderness about thirty miles north of Anchorage. Some of them returned to the states but the ones that remained did well, eventually.

Hildur was to have her first airplane ride. Aina kept telling her that there was nothing to worry about- “I feel so safe in a plane and like it better than riding in a car…”

We took off from Anchorage in a Star Airways five passenger Bellanca on skis with pilot “Sas” Sasseen. The plane came to a slight down-draft soon after takeoff and dropped about fifty feet. Aina grabbed Hildur’s ~ knee and yelled, “Here we go!”

The rest of the trip through the mountains especially through Rainy Pass was nerve wracking. Small planes were forced to fly through the pass because they could not go high enough to clear the mountains. Sas had to land in Iditarod on a short narrow patch of snow, for the air strip in Flat had bare spots. The patch of snow was so short that he had to groundloop the plane on reaching the end.

We had bought my old cabin from Aunt Bertha. It sat on the edge of Otter Creek and during the winter the creek had frozen to the bottom, so the water ran on top of the ice forming a glacier around and inside the cabin, building up to the window sills. Such a sorry looking home to come to! But it takes young people, and Hildur was not a complainer.

Hildur and I went back to the store and Harry Sheppard gave us the key to Bill Burns’s cabin. It had two rooms. Bill was out on his trapline and Harry said he was sure it would be o.k. with him, for Bill ‘ was not expected back for at least a month.

We borrowed two shovels, an axe and a pick from Bill’s place and went down to start the task of cleaning out. We chipped and shoveled out the ice from the room and stove, then built a fire and kept it going for several days.

About five days later a loud racket woke us up. Bill came in the door. I told him of our plight, saying we would move out in the morning and for him to sleep on the cot.

“Stay as long as you like,” he said. “I will go and stay with Paul Willenberg.”

Before many more days we were able to move into our place. Since Bill did not let us pay him for the wood we used and the use of his house, we had Gus bring him a cord of wood.

I went to work on April first helping overhaul the dredge for another season of digging. As before, my job was to swing the sledgehammer to cut the rivets.

On June twenty-first we had to send a wire to Noel Wien in Fairbanks to come take Hildur to the hospital. Mrs. Brown, a former nurse, said the severe pain in her side was appendicitis. Noel came about nine in the evening. The trip in was fine, taking nearly three hours. He climbed high enough to show Hildur the midnight sun, and low enough to buzz a grizzly bear on a hilltop. She stayed with Bertha after the operation and returned in ten days.

The custom in Flat and in all the interior villages was to charge at the store through the winter and pay up in summer during the work season. The price of groceries and everything else was high, because of high transportation costs from Seattle.

During the summer the water in Otter Creek was eroding the bank next to our cabin, and although I tried to prevent it by piling big rocks and junk iron, it still kept undermining. It finally got so bad that a corner of our place was hanging over the bank.

I worked twelve hours a day on the dredge, and spent evenings jacking up and putting wooden skids under the cabin. Fritz Awe was then able to move it to a new location.

During the winter of 1935 we had a dance at the Moose Hall once a month. With nothing else to do, we visited back and forth with families that spent the winter in Flat. Many of the people who could afford it went to the states to escape the cold weather.

In the first part of December Hildur and I got one of the dog team owners to take a load of groceries up to Gus’s mine six miles away. We followed on skis. We lived in one of the cabins there and I cut cordwood to sell to Fritz Awe. He took over Gus’s wood hauling business when Gus started mining. 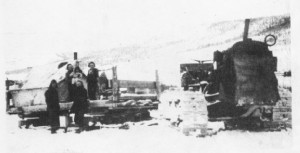 On Christmas Eve in the afternoon we filled the stove with big chunks of wood and closed the drafts nearly tight so the groceries would not freeze. We went the six miles to Flat on our skis to attend the Christmas Eve party at the Moose Hall. After the school children had their program and presents, we all had a potluck supper and danced the rest of the  night. The women were few in number, so they had to dance every dance.

We were very tired the next morning but had to return to Slate Creek before the fire went out and things froze. About three miles from camp Hildur said she couldn’t make it, she was too tired. After resting for awhile, I coaxed her on by telling her the camp was around the next corner. I had to keep saying this after we rounded each bend to keep her from giving up. We finally made it to the cabin at dusk. Our fire had burned out but since it was a good tight log cabin, the room was still quite warm.

I went to Flat once a week on my skis to get the mail. Pan American had the mail contract from Fairbanks.